When I went overseas this past December to England and Ireland, the burger choices were plentiful. So plentiful in fact that I split my thoughts on them into two separate posts! If you want to read about the burgers in England, check out Part 1, or you can read on and see all the delicious burgers that Ireland cooked up for me (plus a bonus burger in Boston!).

England had some pretty great burgers, but I was especially looking forward to getting to try some of that Irish beef! After a big day of touring the Guinness Brewery and visiting the oldest pub in Ireland (The Brazen Head), I stopped at Jo’Burger for dinner. With a big list of really creative burgers to try, it was hard to pick just one, but I eventually chose the Moroka.

This burger was huge. It towered on the plate in front of me, and it was definitely a challenge to get a full bite, but this is the kind of challenge I live for!

I loved the juicy, thick beef patty (made from dry-aged 100% Irish beef), and it had a lot of great flavours to it. The big pieces of bacon were draped over the patty, and I enjoyed how generous they were with the delicious meat. The bun was a little bit denser then I usually like, but it held together really well against all the juices.

Brie has quickly become one of my favourite cheeses on a burger, and this was no exception. The Jo’Burger relish added another level of greatness to the burger, but I would have liked just a little more (I’m greedy like that). Despite the somewhat messy moments that were experienced while eating this enormous burger, if I was a Dublin local, I would be a frequent visitor at Jo’Burger!

I splurged and got the onion rings here as well (thanks to the guy at the next table who overheard us considering them and insisted that we try one of his). You get a huge stack of them and they were out of this world! Highly recommend!

After arriving in Belfast for a weekend, I wandered out looking for food and ended up at The Fountain Bar. Knowing nothing about this place, I decided to try their Fountain Burger.

Getting a burger at a place you have no knowledge of can sometimes be a risky choice. However, this burger turned out to be a pretty good time. The bacon was delicious, and there was tons of melted cheese smothering everything. The ‘French fried onions’ (aka onion rings) were awesome, and the crunch was a great partner to the soft, lightly toasted bun.

The beef was well-cooked, and I would have preferred it to be slightly more rare. There was also the ‘creamy pepper sauce’ on the side, which had a gravy-like consistency, and this was a new experience for me in terms of accompanying a burger, but it was absolutely delicious, and I covered every bite with it!

City Picnic was another place that I had not heard of until arriving in Belfast, but when I saw that they advertised that they had ‘The Best Burgers in Belfast’, I knew I needed to give them a try.

With a menu primarily dealing with burgers (they also have a list of hotdogs, wraps and salads, among other things), I felt pretty at home here. I was having some intense meat cravings during this visit, so I made the appropriate choice when choosing the Carnivore burger.

There was a good amount of pork on this burger, however I would have liked some more sauce on this one to accompany all the meat. In terms of the patty, I requested medium, but it was pretty well done. That being said, there was some great flavours showing through in the meat.

As always, I was a big fan of the onion ring, and the bun that brought this burger together had a great texture and it held everything together nicely. I have only had two burgers in Belfast, so I can’t really speak to this one being the best, but it did have some nice components!

I did get a chocolate milkshake during my visit as well and I wasn’t overly pleased with it. It was more the consistency of chocolate milk and it’s taste was very reminiscent of chocolate syrup. If you are a milkshake lover, this may be one to avoid.

After returning to Dublin, I still had a couple of places on my burger bucket list that I had to check off, and Bóbós was one of them. While preparing for this trip, which included researching burger places (totally normal for a burger fanatic like myself), I read a lot of great things about this place which made me pretty excited to stop by. They have a huge list of burgers, which made my decision difficult, but ultimately I went with The Humpty Dumpty.

You can tell just by looking at it that they take a lot of pride in the burgers that they put out. All the toppings were neatly constructed inside the bun, and it allowed each element to be seen before you even picked up the burger.

Inside this huge creation there was many things to rave about. They don’t skimp on the greens (rocket), which is nice because it balanced out the huge pieces of cured smoked bacon that they pile on. The egg was also delicious and it had a perfect runny yolk, which did cause the bun to fall apart, but it was definitely worth it!

I would have liked some more of the Bóbós burger sauce as I couldn’t really taste it, but overall, this was an awesome (and super filling) burger!

As one would expect, pubs are very plentiful in Dublin. So much so that I dedicated a day to doing a self-made pub-crawl that consisted of ten pints at ten different pubs. That being said, it was safe to say that the next morning I wasn’t 100%. The cure? A big ol’ juicy burger from Bunsen!

The menu here is very straightforward, and there are only a few choices (the menu is printed on business cards). You get to choose between either a hamburger or a cheeseburger, and you can make it a single or a double. Wanting to go all out, I went with the double cheeseburger.

The burgers here get right to the point and don’t mess around (their motto is “straight up burgers”), and the first thing I noticed was the two big beef patties. I ordered my burger medium-rare and it was spot on. The beef was delicious, and was dripping juices (this burger gets messy, so get your napkins ready!). There was tons of cheese smothering all that beefy goodness, and the bun was soft and the perfect size for this double burger.

The burger comes with traditional burger toppings, and everything comes together to create an awesome, nothing fancy, classic cheeseburger, that was exactly what my beer-induced hangover needed! 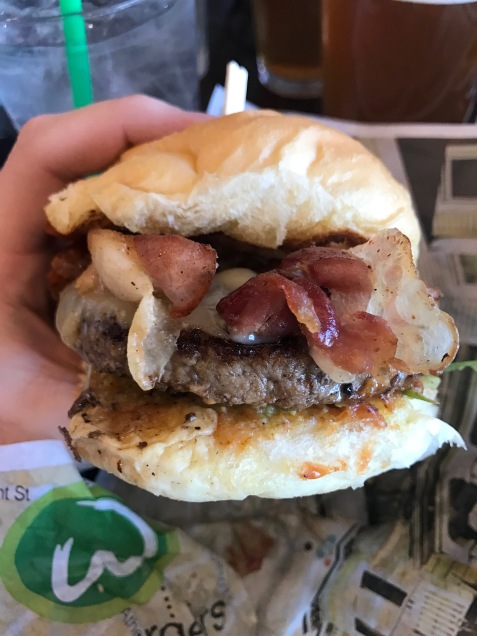 During the long flight back to Halifax, I had a six hour layover in Boston, and there just so happened to be a Wahlburgers at the airport, so I stopped in to give their burgers a try.

I ordered the BBQ Bacon burger, and it came to the table surprisingly fast. The burger did seem somewhat rushed as the cheese wasn’t very melted, and the bun was partially cold.

I really liked the house-made BBQ sauce, and when combined with the jalapeños, it gave the burger a nice kick. There was an impressive amount of bacon, and I really appreciated all the avocado underneath the patty because it balanced out the spiciness of the jalapeños.

Despite feeling a bit rushed, this burger was pretty decent, and I would stop by again to try something else (and have another pint of their Wahlbrewski – a tasty pale ale that they serve up at the bar).