Since I started doing this blog, I’ve had a lot of people suggest different burgers to me that they think could be top contenders. One of these recommended places was Durty Nelly’s. Located at 1660 Argyle Street, Durty Nelly’s is a popular spot for both eating and drinking, which tends to be the case for most establishments on Argyle. The burger that I went with for this visit is titled the Whiskey Smoke Burger. 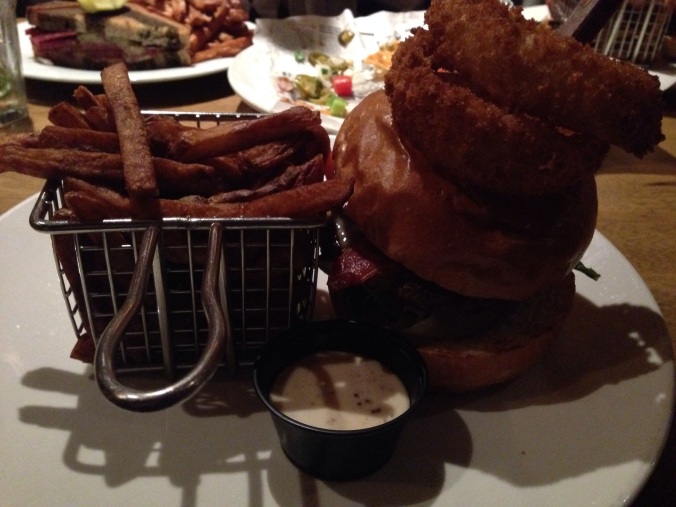 There are times when a burger is placed in front of me and I know instantly that it’s going to be a really good time. This was one of those instances. If you have read my other posts then you know how much of a fan I am of incorporating onion rings in a burger. Not only does this burger do that, but it proudly displays them on top of the bun. The presentation of this burger all around was very clean and visually appealing. They also use the little fryer basket for their fries that I have seen at a couple of different places (both of which were also on Argyle), and it really makes the dish look more appealing. 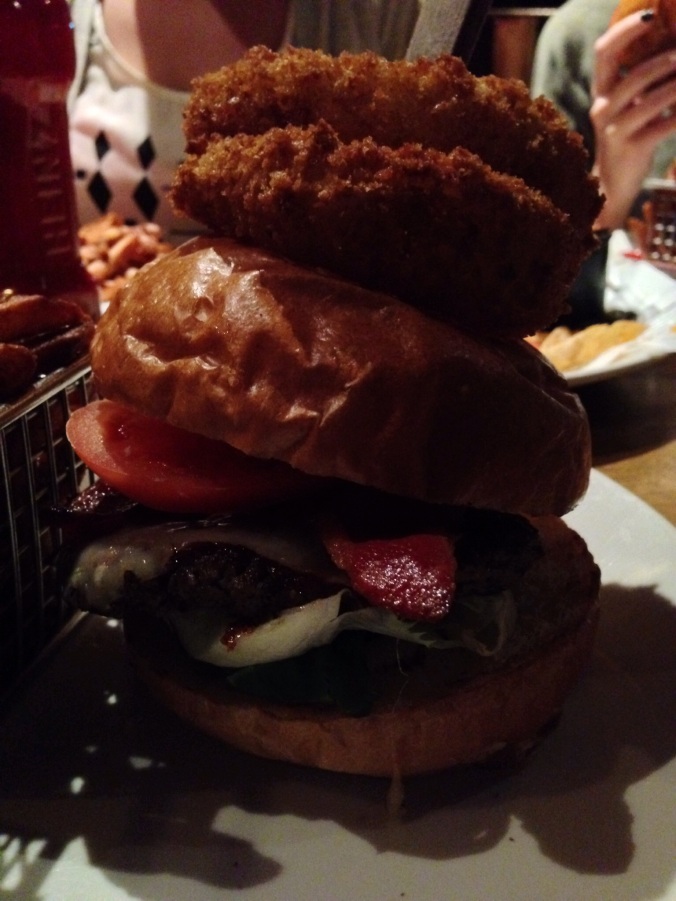 Before I took a bite of this burger, I moved the onion rings from the outside to the inside of the bun, mostly because it seemed like the most logical thing to do. Once I actually took some bites, I was instantly impressed by this burger. The patty was cooked really nicely, and together with the whiskey apple BBQ sauce it created a really delicious taste in my mouth. The onion rings were a very welcome addition to the burger (no surprise there), and it just strengthened my view on onion rings in burgers. I think my favourite part of this burger was the Guinness honey mustard. It was so tasty, and I just couldn’t get enough of it. I even started dipping my fries in it because it was that good!

Admittedly, this was my first time coming to Durty Nelly’s for food. I have been here many times before, but those were more so alcohol inspired visits. Inside of the pub is really beautiful. On their website, they explain how it was designed and built in Dublin and then was sent to Nova Scotia to be reconstructed piece by piece. Our waiter was also great. He was friendly and helpful, and he really made our experience that much better. It was pretty empty when we went there, but it was also raining quite a bit so that probably drove away a lot of people.

My experience with this burger was a very positive one. I highly recommend this burger, and Durty Nelly’s as a whole, as it doesn’t fail to be both deliciously good and perfectly filling.